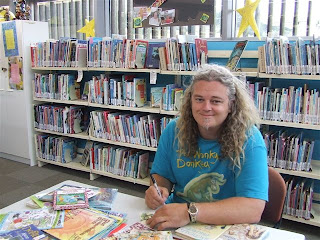 I was lucky enough to see Craig perform at my local library as he currently tours around Australia. He's here to promote another picture book, All I Want for Christmas is My Two Front Teeth, in which he has recorded the accompany CD.


I'd organised a few days earlier to interview Craig on my blog to which he politely agreed. Needless to say, I was thrilled to chat with him.

Congratulations on the huge success of your picture book and CD, The Wonky Donkey. What has this experience been like for you? 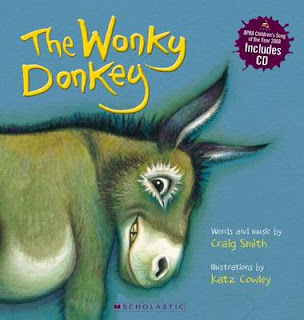 What inspired you to write, The Wonky Donkey?

The old joke: What do you call a three legged donkey?

How long had you been performing before you received your first book contract?

I'd been performing to children at markets and festivals for approximately four years and parents would often ask me,'Do you have a CD that I can buy?' 'No, I don't,' I'd reply. And they'd walk off.

Previous to that, like many musicians, I'd performed in pubs and clubs for about ten years.

What has been the highlight of your career so far? 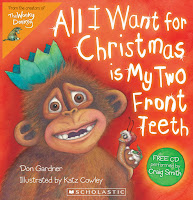 How did your latest book, All I Want for Christmas is my Two Front Teeth, come about?


It's always been one of my favourite Christmas song because my mum used to sing it to me when I was a kid. It was originally written by Don Gardner and Scholastic Books had bought the rights. It also fit  well with a song I'd already written called 'Toothless' which is also on the accompanying CD.

I'm self publishing a children's book called, Kaha the Kea. 'Kea' is a New Zealand bird and 'Kaha' means strong. I'm also working on another picture book called, The House that Wonky Built.'
Posted by Unknown at Monday, November 07, 2011

Email ThisBlogThis!Share to TwitterShare to FacebookShare to Pinterest
Labels: All I Want for Christmas is My Two Front Teeth, Craig Smith, Scholastic Books, The Wonky Donkey

Brillian Renee! And I love his WD inspiration. Finally a joke I get!!
Glad you had such and inspiring time last Thursday. Can't wait to read Craig's latest offering. Cheers Dimity

Thanks Dimity. It was great to see Craig perform and Sienna's been listening to the CD's. The Christmas book is great and even the monkey has his version.