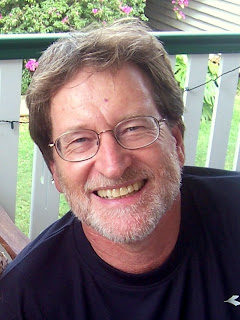 When did you first know you wan to be a writer?


I first thought about it at Uni. But back then I mainly had crazy dreams of being a singer-songwriter like Bob Dylan. At one point I tried writing some poems for a magazine and a comedy sketch for a TV show. Even though I received some encouraging feedback, they were both rejec and because I had little self-belief I more or less gave up on the idea of being a writer for a while. Years later when I was teaching I star thinking about writing short stories and sending them off, but I never really found the time or motivation to do it. Eventually one of those short story ideas that I didn’t get around to writing grew into The Running Man and I became so desperate to write it that I quit my job halfway through a teaching year. That decision changed my life.


What's the best part about being a writer?


It’s a dream come true for me so it’s hard to say just one thing. It really is a blessing to have the opportunity to create little worlds with your stories and express something of yourself and what you value through them and to be able to share that creation with other people. And it doesn’t get much better then when someone tells you that something you’ve written has touched them in some way or given them pleasure or made them smile or even laugh out loud.


Congratulations on receiving the (CBCA Honour Award) for your children's book 'Just a Dog.' Can you tell us about it?

Thank you! Every novel I’ve written has always star out as some tiny thought or idea. The idea for Just a Dog began one morning when I was out walking and for some reason the name ‘Mister Mosely’ for a dog came into my head. I’ve tried, but I can’t remember where it came from and I have no idea why I would have even been thinking of dog names. I certainly wasn’t planning to write a story of a dog and we didn’t have a dog and we weren’t thinking of getting a dog. But the name stuck and it made me curious and I began to wonder what a dog called Mr Mosely might look like. It was a big sounding name so I imagined a big dog. A big, white dog – loyal, friendly and gentle – but just an ordinary dog. I also star to recall all the stories associa with the dogs our family owned when I was young – the funny stories, the weird stories, the happy stories and of course inevitably, the sad stories. I became interes in maybe using some of them to write a dog story that would hopefully be something more than a dog story, about a dog, who though ordinary, was for his struggling, broken family, much more than just a dog. I was also motiva by the challenge of trying to tell a powerful story using only the simple language of an eleven year old boy. (If you’ve read The Running Man or any of the Ishmael books you’ll know I’m not adverse to using a metaphor or a simile or two!)

What's your secret to making your characters come to life?
I can’t tell you, it’s a secret! Ok, first I threaten them and if that doesn’t work, I attached electrodes to their brains, tie the other end of the cable to my TV aerial and wait for an electrical storm.
And if THAT doesn’t work, well I just try to think of them as real people and not characters. I try to imagine what motivates them to do what they do. As Dr Phil says, people behave the way they do for a reason. I also try to imagine what their lives are like, or have been like or will be like, outside of the narrow confines of my story. I think if you try to understand your characters then they will come to life for you, and if that happens, there’s a good chance you can make them come to life for your readers. Another thing I would say is make sure you can picture what your characters look like very clearly in your mind.

When and where do you write?
I write best in the morning and during the day - if I can pry myself off Facebook! For some reason I rarely write at night. My wife would say it’s because I watch too much reality TV. She could be right.
I tend to write either in our study upstairs or at a little computer nook downstairs. The main thing for me is that I need to be fairly isola. I can’t write with anyone near me or with too much noise or with music playing. I like it just to me, the characters and the story, lost in our own little world. Even though I’m really drawn to the romantic notion of writing in a café somewhere sipping coffee, I know it wouldn’t work for me.

How do you think we can encourage children to read and write more?
I suppose force would be out of question? Well then I think if we need to encourage these things from a young age, particularly the fun and pleasure of reading and being read to. For older kids we need to make them aware of the fantastic range of books and stories out there and help them find the books that fit their personality and interests. That’s why we need to employ more of our wonderful teacher-librarians and support and value the fantastic work that they do. Inviting authors to schools is good too!


What has been the biggest highlight of your career?
There really have so many but it’s hard to beat the memory of getting that phone call where someone tells you that they actually want to publish your very first novel -especially after you had prepared yourself so well for failure. Winning the CBCA Book of the Year with my first novel will also be something I will never forget. Another recent highlight for me was being invi to the White Ravens Children’s Literature festival in last year and getting to play the songs I wrote for Ishmael and the Return of the Dugongs at a concert in a big marquee full of people with a German rock band. I still find it a bit hard to believe that actually happened.
What are you involved in over book week?
I have a full week of school visits here in Brisbane doing talks and workshops followed by another full week in Melbourne schools

What do you do in your workshops?


I tell stories to help illustrate the important ingredients needed to make a good story, as well as doing a range of writing activities for various age groups. The workshops focus on different things such as short story writing or using humour in stories or how to find and develop story ideas. Mostly I try to make the workshops fun and well as being helpful to young writers.
What advice would you give aspiring authors?
Read a lot, especially in the genre you want to write. Write the stories that interest you, the ones that you’re passionate about, the ones you couldn’t bear not to write. Be persistent and determined. Writing can be a slow, hard, frustrating, lonely slog sometimes. But as someone once said, ‘Writers write. Authors finish,’ so keep at it and stay positive. Finally, seek out the company and support of other writers and like-minded souls. In my experience, writers, at least those who write for children and young adults, are lovely and generous people!
Michael Gerard Bauer resigned from teaching in 2000 to follow his dream of becoming a writer. His first YA novel The Running Man was published in 2004 and subsequently won the 2005 Children’s Book Council of Australia (CBCA) Book of the Year for Older Readers as well as being short-lis for the NSW, Victoria and South Australian State Premiers’ Literary awards.
In 2007 his second novel Don’t Call Me Ishmael! a ‘laugh out loud’ comedy was short-lis in both the CBCA awards and the NSW Premier’s Literary Awards and won the 2007 Children’s Peace Literature Award and the 2008 South Australian Festival Award for Children’s Literature. It was also included in the 2007 White Ravens selection for Outstanding International Books for children and young adults. Ishmael and the Return of the Dugongs and Ishmael and the Hoops of Steel complete the Ishmael series. Michael’s other novels include, Dinosaur Knights, You ! and Just a Dog which has just been named a 2011 CBCA Honour Book in the Younger Readers category.
These days Michael is a full time writer and his books will soon be sold in around 20 countries including the and .
Posted by Unknown at Monday, August 22, 2011

Email ThisBlogThis!Share to TwitterShare to FacebookShare to Pinterest
Labels: Ishmael and the Hoops of Steel, Just a Dog, Michael Gerard Bauer

Lovely interview, Michael and Renee. I keep finding out new things about my friend, Herr Bauer! :)

Thanks Sheryl. It's a great interview! It's no wonder that Michael is such a popular children's author. His sense of humour and attention to great writing really shines through in this interview! I hope you have a fabulous book week and I look forward to sharing your interview tomorrow.