When did you first know you wanted to be an author?
I was about 16 when I won a state writing competition and had some short stories published in an anthology. At the time, I told everyone I wanted to be a writer, but quote a few people – my teachers included – talked me out of it. They said it was too hard and I’d never make any money!
What was the road to publication like for you?
It took a while for me to get started on the road, thinking that I could actually achieve my dreams. Not until I’d had a few kids and was home with them did I finally decide that writing wasn’t a hobby for me anymore. Once that decision was made, I attended workshops and wrote night and day until I started getting acceptances. There were little wins along the way such as competition awards and short stories being accepted for magazines. It was four years before I had a book acceptance (Puggle’s Problem) but those little successes along the way kept me going. Now, since that first book was published a year ago, I’ve had five others come out and I have another twelve in the pipeline, so I’m very glad I stuck with it.
What makes you passionate about writing?
The constant flow of ideas, an inner drive to write, the delight of seeing kids read and enjoy my work and encouragement from my family.
Can you tell us about your books? 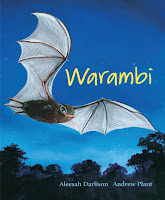 Puggle’s Problem is a picture book about a puggle, or baby echidna. The first time I saw a photo of a puggle, I fell in love and knew I just had to write a book on one. The puggle in Puggle’s Problem can’t get his spines so he sets out to ask his friends for some advice. It’s essentially a tale about patience and perseverance – two of the hardest things kids have to learn! - and it showcases some of Australia’s best-loved animals.
Warambi is my second picture book. It’s about a microbat, a Little Bent-wing bat. At full size, she’s as big as your thumb, about 45mm long. So she’s absolutely tiny. The book is a result of a story my mum told me about a bat who had set up a roost in a very unusual place. Something about a bat out on her own, alone and away from her family, really appealed to me. I started researching bats and writing the story (24 drafts). I was over the moon when Working Title Press picked up the story. Andrew Plant is the artist who did the illustrations for Warambi. They’re very dramatic and striking and full of colour and intensity. I’ve met a lot of bat lovers, people who volunteer for FAWNA and WIRES, since the book has been published. They’re all wonderful, supportive people and they have an enormous passion for those tiny little creatures who are often misunderstood.

My junior series, Totally Twins: The Fabulous Diary of Persephone Pinchgut, has just had its third instalment released called ‘Tropical Trouble’. A fourth is due out early 2012. The books are written in diary format by Persephone Pinchgut. She’s an identical twin who gets up to all sorts of fun and adventures with her sister, Portia. Although the girls look the same on the outside, they’re very different on the inside. This often leads to tension, drama and tears – and also quite a few laughs. I’m thrilled with how well the series is doing and I have so many young readers who tell me how much they love the twins and the books. It makes it all worthwhile!
The other series I’d like to mention is due out in October this year. It’s called the Unicorn Riders and I’ve spent most of this year writing and editing the books. Unicorn Riders is a fantasy adventure series for girls aged 8 plus. They’re published by Walker Books and are illustrated by Jill Brailsford. There are 4 Unicorn Riders who care for and ride 4 unicorns. They protect their magical kingdom of Avamay from evil forces like Lord Valerian. This has been a huge and exciting project for me to work on and I’m really looking forward to October when the first 4 books in the series will be released.
Where do you get your ideas from?
From my childhood, from the world and people around me and from my imagination.
What do you like the most about being a writer?
Getting lost in the creation of worlds, stories and characters. Sharing my love of books and storytelling with children.

What is the most challenging part about being a writer?
Juggling deadlines, promotional activities and family responsibilities. Sometimes it can be hard to find time to write.
What do you like to read?
Because I review books for the Sun Herald I tend to read a lot of children’s books. I love reading picture books with my children, we have hundreds at home.
What is your writing schedule like?
Probably not as healthy as it should be right now! I tend to write while my kids are at school (if I’m not doing school visits myself) and also late into the night. Whenever I can slot it in, basically.
What's the best part about presenting and conducting workshops?
Connecting with kids, inspiring them, making them laugh and – hopefully – teaching them a few skills to make writing easier for them.
What are you involved in over book week this year?
August and September are huge months for me. I’m quite concerned my kids my forget my name by the end of it! I’m attending festivals, literary lunches, and conducting a range of school visits and writing workshops at community libraries. This involves a lot of travel throughout NSW, ACT and QLD. One recent highlight has been a trip to Dubbo where as part of my video conference group, Literature Live!, we conducted “Book Week Shows” to over 28 schools as a group. I also visited Dubbo South Public School and held video conferences and face-to-face sessions from Taronga Western Plains Zoo with thirty-four schools in one day. I was exhausted at the end of it, but the feedback has been so positive - plus I had a blast. At one stage, I had a 10kg python wrapped around my neck (I felt decidedly like Kerri-Anne Kennerly) and I also got up close and personal with koalas, possums, echidnas, frogs and baby crocodiles who were all part of the ‘Book Week at Taronga’ shows. 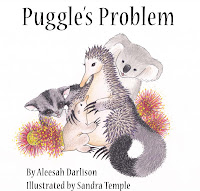 What were your favourite books growing up?
The usual suspects for my generation: The Narnia Series, Enid Blyton, Little Golden Books.
What advice would you give aspiring writers?
Don’t ever give up, you never know what’s around the corner, ie your first acceptance perhaps! Succeeding as an author is hard work. You need energy, persistence and a willingness to accept rejection. But when you do succeed and you see your name on your first book, it’s all worth it. And the feeling you get when you see a child reading your book as they walk along the street on their way to the school, well that makes it all worth it too!
Aleesah Darlison – Author Bio
Aleesah writes picture books and novels for children. She also reviews books for The Sun Herald. Aleesah’s stories have appeared in the black dog books Short and Scary Anthology, Chicken Soup for the Soul Anthology, The School Magazine and Little Ears Magazine. She has won numerous awards for her writing including an Australian Society of Authors mentorship with Kate Forsyth.
Aleesah’s books include: Puggle’s Problem, Warambi, the Totally Twins Series and the soon to be released Unicorn Riders Series. Aleesah is a founding member of Literature Live! a dynamic group of Australian authors and illustrators who present creative writing and illustration workshops to schools through videoconferencing and IWB technology.
Posted by Unknown at Monday, August 22, 2011

Thanks for the interview, Renee. Looks good! Best wishes, Aleesah

Thank you Aleesah for inspiring us and sharing your fabulous children's books. I love my copy of Warambi!