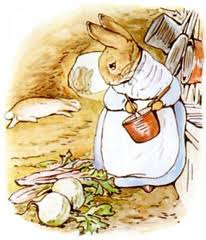 Animals in Picture Books
The Tale of Peter Rabbit Beatrix Potter
Winnie the Pooh A.A. Milne
Charlotte's Web E.B.White
Alice in Wonderland Lewis Carroll
The Wind in the Willows Kenneth Grahame
The Wombles Elisabeth Beresford
All of these picture books have animals as characters.
Anthropomorphism is giving human characteristics to objects or animals. This is also recognised in children's writing as, 'Personification.' Beatrix Potter wrote and illustrated her first children's book featuring anthropomorphic characters in 1902. She went on to publish twenty popular children's books about her characters such as, Peter Rabbit, Benjamin Bunny, Tom Kitten, and Jemima Puddle-Duck.
Contemporary children's authors still use animals in their stories to model human behaviour.
The advantage of writing animal characters is that an animal character can often do what a child character cannot. Children can identify with the emotions associated with the character and still hold a certain amount of detachment.
The late Richard Scarry once said he used animals to eliminate racial stereotypes, and also children relate better to talking animals in stories than to talking children.
Where do animals stand in today's publishing? Do publishers detest animals carrying out human traits? Do they prefer animals behaving as animals in their natural environment? My guess, is that it's a bit of both. It's a tricky task to write animals as characters but there are many authors today that do a marvellous job of it.
According to Harold Undown in his article, Getting Out of the Slush Pile, What's In and What' s (Often) Wrong,' addresses the use of talking animals: Editors are sick of Sammy Squirrel and Max Mosquito. The same goes for Claude the Cloud, Billy the Button or any other inanimate object. Follow this rule: if it doesn't talk in real life, don't have it talk in your story. However, in recognition of the fact that many popular children's books contain talking animals, the article explains further, Talking animals aren't completely taboo, it's just that most writers don't do them well. What's important is that animals have completely developed, unique personalities and characteristics. You need to create these characters as carefully as if you were creating a human character.
Animals in picture books have been hooking kids into reading for years and going by the following list of popular picture books, it's not about to disappear anytime soon.
* Bear and Chook by The Sea Lisa Shanahan
*Kip Christina Booth
*A Sick day for Amos McGee Phillip Stead
*The Lion & the Mouse Jerry Pinkney
*The Terrible Plop Ursula Dubosarsky
*Old Tom Leigh Hobbs
*Arthur Marc Brown
*Make Way for Ducklings Robert Mc Closkey
*Little Beauty Anthony Brown
*Rosie's Walk Pat Hutchins
*Noni the Pony Alison Lester
*Diary of a Wombat Jackie French
*There's a Hippopotamus on Our Roof Eating Cake Hazel Edwards
*Old Pig Margaret Wild
*Farmer Duck Martin Waddell
*The Town Mouse and The Country Mouse Susanna Davidson
*Hunwick's Egg Mem Fox
*Peeking Ducks Krista Bell
*Harry and the Dirty Dog Gene Zion
*The Blue Chameleon Emily Gravett
*Crocodile Beat Gail Jorgensen
*Fish Don't Need Snorkels Karen Collum
*Olivia goes to Venice Ian Falconer
*Giraffe's Can't Dance Giles Andreae
*Elmer David McKee
*Where is The Green Sheep? Mem Fox
*The Very Cranky Bear Nick Bland
*And Tango Makes Three Peter Parnell, Justin Richardson
*Tiddalick The Frog Anne Faundez
*Fox in Fine Feathers Narelle Oliver
*The Three Snow Bears Jan Brett
*Christian, the Hugging Lion Justin Richardson, Peter Parnell
*The Great Bear Libby Gleeson
*Rufus the Numbat David Miller
What's your opinion about using animals in picture books?
Posted by Unknown at Thursday, June 09, 2011

Hi Renee,
Congratulations for this well-researched Blog on Animals in picture books. Why are they so popular? Love of animals is a universal theme ... They pull our heart strings and reach out to our imagination.

Hi Karen,
Thanks for your reply. It'd be interesting to look at how writer's develop their animal characters. I love Pooh Bear, Old Tom, and Olivia. All three characters have completely different personalities and are so fleshed out that I sometimes forget that they're even animals. It's fascinating how characters speak volumes just from a sound, a look, and their mannerisms. It's definitely made me look at animal characters differently when writing.

Anthropomorphism is just one step from anyone who talks to/for pets. 'What did you say? But you only ate an hour ago!''You want me to sit down so you can have a lap?' etc. We all pretend we can understand cat/dog language, it's just one step on from this. THis is why it's so convincing. And children understand at two or before - 'Animals don't talk!' but they do really enjoy them. virginia