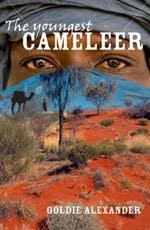 about the DISCOVERY OF ULURU!

Ever wondered how ‘The Ghan' train got its name?

· or who discovered Uluru?

In 1873, William Gosse’s exploratory party attempted to find a route from Alice Springs to Perth. Instead they stumbled upon the Olgas and Ayers Rock (ULURU).

William Gosse thanked his Moslem Cameleers, claiming he couldn’t have done it without them.

In this novel based on Gosse’s actual diary, fourteen year old Ahmed Ackbar, the fictional ‘youngest cameleer,' helps look after four camels. As the expedition treks into the interior, Ahmed must cope with homesickness, Jemma’s enmity, and this new harsh territory.

How do you approach writing historical fiction?
When I write historical fiction I try to portray significant events as well as keep you interested. I’m careful to only use research as background where people move about in an everyday way. Convincing characters, plots and structure keep us reading. Show, don’t tell is important. Characters must move about as if this is their ‘today’.
What inspired you to write this story?

My latest historical novel “The Youngest Cameleer” is about one of the lesser known explorations into the Australian interior, led by William Gosse in 1873. The various members of this exploration (both European and Afghan) did exist and my story is based on Gosse’s own journal now kept in the State Library of South Australia. This expedition was the first non-indigenous group to come across the major icon of Uluru. Without the use of camels and Afghan cameleers they might not have survived those harsh desert conditions. Though it is the first time any cameleer was praised for helping open the interior, these facts are not well known. Nor that an Australian aboriginal boy was an invaluable member of this party. Some cameleers even lent their name to landmarks, such as Kamran’s Well and Alannah Hill. My intention was to bring this expedition to life by creating a fictional character that was part of it. Thus I came up with Ahmed Ackbar, a fourteen-year-old Afghan and my ‘youngest cameleer’.

Dialogue and first person narrative help create characters, so Ahmed tells his story in fluent Pashtu, but his English is limited. He is the only surviving male in his immediate family. In late 1872 he sails into the prosperous city of Adelaide to help look after four camels. Yet he has other things on his mind. What if his uncle Kamran isn’t as innocent of his brother’s death as he seems? As the expedition treks into the Australian interior, Ahmed must cope with Jemma Khan’s enmity, his own homesickness, and the difficulties of exploring unknown territory.

How can 'The Youngest Cameleer' encourage learning?

Readers might like to track Ahmed’s journey on a map of Australia. They can delve into how our first people behaved when they came across these explorers, suggest reasons, and their appearance was back then. They can research contemporary Uluru, both as an icon and tourist attraction. They can ask: what route does the Ghan railway take? What was there before the railway? What is the climate and terrain around Alice Springs like? What happens to that land when it rains.

If we don’t have Aboriginal ancestors, we are all migrants. My parents arrived in Australia in the first part of the twentieth Century and settled happily in Melbourne. Our great migrant waves have occurred at various times: during the gold-rush, straight after World War Two, and in the seventies when the ‘boat people’ arrived. It’s good to recall that Afghans have been responsible for opening up our vast continent and that without their camels the task would have been harder than it already was.

Did you always want to be a writer?

When I was young I always longed for a machine that would allow me to become part of a story. I always wanted to befriend some of the characters I read about. Then I could have had a fresh start with a whole new set of people. Back then as a somewhat solitary child who spent her life reading and imagining I was somewhere else with a ‘nicer and far more sympathetic’ family, I would have given anything to be assured that my loneliness would surely pass. I hope that maybe I can interest my readers into thinking the same way. I would like to help them look beyond the immediate present to see life as the continuum that it surely is.

for adults; mysteries, science fiction and magic realism for children.