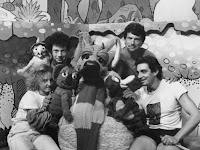 I'm delighted to welcome one of Australia's favourite children's authors and illustrators, Michael Salmon, to Books for Little Hands.

You started your career entertaining children in a marionette troupe called, The Tintookies. What was this experience like?
Fantastic, it was a quickly served apprenticeship into the enchanting world of children's professional entertainment. Engaged originally as a stage manager, I then spent several years as a set designer then became the Company's Artistic Director (1968 - 1976).

When did you make the transition into writing and illustrating children's books?
It was a very amateur, self-published book that started it all back in 1972. 'The Monster that ate Canberra' was released out and tickled funny-bones in the ACT. The monster himself, 'Alexander Bunyip', was indeed the Public Service thinly veiled, couched in a children's book format (vague social commentary). 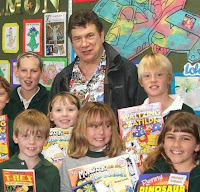 How many books have you written?
162
What's your secret to writing interesting book characters?
Humour, eccentricity ... sometimes a tad 'surreal'.
Also the fact that I'm visually creating them as well.

What inspired you to write and develop your most popular children's character Alexander Bunyip?
'Alexander lived in Lake Burley Griffin in Canberra, our National Capital ... a perfect billabong hideaway. He feasted daily on the iconic Australian buildings and structures by the lakeside ...'
It was a commentary re living in the ACT at that time: The Public Service devoured ALL...
Please also refer to Q2. 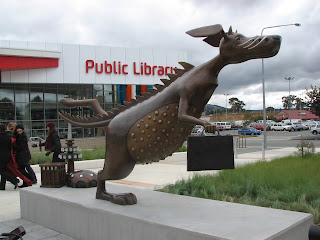 Congratulations on the unveiling of The Alexander Bunyip Statue created by Ann Ross in Canberra.  Can you tell us about it?
The Gungahlin Community Council proposed the idea to the ACT Government in 2009.
It was seen as a tribute to the book in its role of aiding 'young Canberrians' to read over the last four decades.
It was their very own 'Canberra Book'.
It had popular local support and won approval.
The commission was awarded to Anne Ross (Melbourne).
She did a brilliant job: $175,000 budget and 500kg of bronze.
Unveiled by Chief Minister Jon Stanhope in April 2011, it stands in the Town Park, directly outside both the new Public Library and new Secondary College.
The buildings at the back of the Bunyip statue light up at night!
What are some of the biggest highlights of your career?
*40 years of visiting Australian schools (talking to and cartooning for: over a million and a quarter students).
*Having the 'Alexander Bunyip Show' on afternoon, National ABC-TV for a decade.
*Forthcoming involvement with The National Library of Australia, presenting cartooning 'History shows' there this June ... to ACT School Students.
*Show content will be based on the artifacts, papers and maps on exhibition in 'The Treasures Gallery' You've visited more than 5000 schools. How do you connect to children during visits and keep them entertained?
Fast cartooning, lots of lively chat, humorous stories and interaction with the student audience. I speak to all age groups at once, usually in audiences between 150-500 Students. 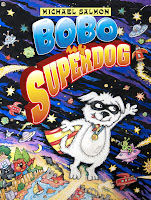 Tell us about your latest book, Bobo, My Superdog.

But Bobo is always home for dinner!

I've noticed that you have an incredible collection of photography. When did your passion for photography begin?
I'm thoroughly enjoying my 'facebook experience'. I have my own page and eight of my characters have their own individual pages also. I post up interesting and 'odd' pics/photos that I find whilst voyaging around the 'IT Ocean'. I passed the 6000 mark a while ago! It's probably becoming an obsession.... It can join the queue!!!!

Michael Salmon has been involved in graphics, children’s literature, TV and theatre since 1967. He started his career with surfing cartoons and exhibitions of his psychedelic art and then joined the famous marionette troupe ‘The Tintookies’ as a trainee set designer/stage manager in 1968 (The Australian Elizabethan Theatre Trust).

Since then, his work has been solely for young people both here in Australia and overseas. His many credits include his ‘Alexander Bunyip show’ (ABC TV 1978-88), pantomimes, fabric and varied merchandise designs, toy and board game invention and the writing and illustrating of 162 books for young readers.

Michael has extensively toured Australian schools over the past 40 years. His sessions are lots of fun, with lightning fast cartoons, caricatures, silly prizes and general encouragement for students to develop their own creativity.
Many of these school visits can be seen on his web site: www.michaelsalmon.com.au

Recent trips have been up to the Gulf of Carpentaria Savannah Schools and to the remote Aboriginal community schools on Cape York Peninsula as a guest of EDU QLD.

The Australian Government honoured his work in 2004 by printing a 32nd Centenary, special edition of his first book ‘The Monster that ate Canberra’ as a commonwealth publication. Every Federal Politician received a copy!

The first official children's book that the Federal Government has ever produced!
In 2010 the ACT Government further recognised his work by commissioning a bronze statue of his first book character ‘Alexander Bunyip’. ‘Unveiled’ in April 2011, it stands next to the new Gungahlin Library in our Federal Capital.

Michael is also the Creator/Designer of ‘Buddy Bear’ for the Alannah and Madeline Foundation (Port Arthur 1996). The Foundation financially supports Children/Families who are victims of violence/violent crime. Currently they are running an anti-bullying campaign in TAS, VIC, and NSW Schools.
Posted by Unknown at Saturday, February 18, 2012

Wow! 162 books and 5000 school visits? That is an author with passion and purpose. Great interview!

Thanks, Julie. Michael Salmon is such a well known and respected Australian children's author and illustrator.

On top of all that, he created The Buddy Bear program to encourage 'buddies' not bullies in primary schools. What an inspiration!

Thanks, Michael for allowing me to interview you.

Many thanks Renee, most appreciated. Cheers, Michael

Thank YOU, Michael for your great interview.

Facinating interview Renee. I've not had a great deal to do with Michael but wondered why his face is sooooo familiar to me. Great to read about such an achiever and promoter of Kids Lit.