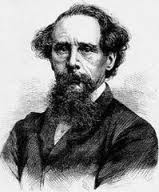 Education: To pay for his board and to help his family,Dickens was forced to leave school and work ten hour days. He eventually went to the Wellington House Academy in North London.

Occupation: English writer, considered to be the greatest novelist of the Victorian period. Dickens is responsible for some of English literature's most iconic novels and characters.

First Book:  A Dinner at Poplar Walk 1883 was published in the London periodical, Monthly Magazine.

Writing Style: Dickens loved the style of 18th century picturesque or Gothic romance novels. His writing style is florid and poetic, with a strong comical touch. He was recognised for his satire of British aristocratic snobbery. Dickens literary style is a mixture of fantasy and realism.

Sold: Dickens' novels and short stories have been so popular that they have never gone out of print.

The whole difference between construction and creation is exactly this: that a thing constructed can only be loved after it is constructed; but a thing created is loved before it exists.


There are books of which the backs and covers are by far the best parts.