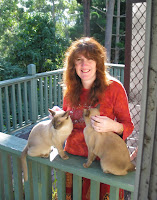 When did you first know that you wanted to an author?
I’ve always loved stringing words together but I never thought about being an author. Although I was an almost obsessive reader, I never found anything that inspired me to want to write. When I had children I discovered how much I loved kids’ books but still the connection didn’t click into place. Then a truly terrible thing happened. My avid-reader 10-year-old son announced all books were boring and he was never going to read another one. 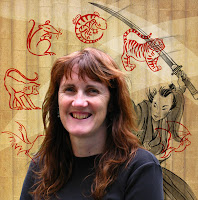 I tried every genre. I raided libraries and friend’s bookshelves. Finally in frustration I asked him to write me a story so I could see what he thought wasn’t boring. To my surprise he agreed, if I did the transcribing. It was a very random, erratic story and I kept trying to give advice. When the main character disappeared literally mid-page “because I don’t like girls any more. There are no girls in my book”, I insisted he explain where she went. He wasn’t putting up with any motherly pushy editorialism and gave me my marching orders. “Go write your own book, mum.”
I’ve been following his advice ever since.

Tell us about your book Polar Boy.
I read anything and everything but my preferred non-fiction subject is ancient history. I was reading about the traditional life of the Inuit people, and how in that cold, desolate Arctic environment, the way of life has not changed for over eight hundred years. The idea of history as both the past and present fascinated me. In addition, the Inuit people, despite their harsh lives, found great joy in their community and their land, which itself was incredibly beautiful and awing. I was inspired and just had to write about all this.
I began to imagine Iluak, a young boy frightened by his Ananasanq’s (Nana’s) prophecy that one day he must face the great bear. When I began the story I had a plot line loosely based increasingly scary encounters with polar bears – animals that truly frighten me. My research soon uncovered a different bear, the Viking ‘berserker’ which at this time was moving south into the migratory lands of the Baffin Island Inuit peoples. I had stumbled on the true meaning of Nana’s prophecy – a story of two very different cultures learning to share the land - and after that, Polar Boy wrote itself. I believe story writing is an organic process and these plot co-incidences happen to me all the time.

What inspired you to write The Jaguar Warrior?
Ever since I was a kid, Aztec history in particular has fascinated me - the stark dichotomy of an intelligent, artistic society best known for its gruesome religious practices. But for the Mexica (the Aztecs’ name for themselves), sacrifice was not a gory spectacle, but the means to ensure the sun rose and the world continued. I wanted to write a story against this contradiction and also to dispel some of the preconceptions my readers might have.
The image of Atl, imprisoned in a dark box, watching a spider spin its web in the only bead of sunlight while waiting to be sacrificed, came to me vividly and entire. I just had to find his story. History provided the clues and when the Spanish invaded, the high priest released Atl to take a plea for help to a nearby city. It’s also about slavery and obligation. Atl is chosen because he can run fast, but why would he run to save people who were going to kill him? His first instinct is to run in the opposite direction.

Where did the idea for the Samurai Kids come from?
Again, it’s my interest in ancient history. I grew up watching The Samurai on television and role-played samurai and ninja with the kids in my street. You cannot train to be a samurai. You have to be born into a samurai family. And if you were, there is no other choice. I started to think what it would be like if you didn’t want to follow your birth right. Or if you couldn’t for some reason that wasn’t your fault. Like you were born with one leg. That’s when Niya, my one-legged narrator, started to explain it to me. He also convinced me to ‘see for yourself’. So I stood one-legged in the back yard – quite pleased to have executed the ‘crane move’ – until I tried a one-legged karate kick. And that’s where the first paragraph came from:
‘Aye-eee-yah!’
I scissor kick high as I can and land on my left foot. I haven’t got another one. My name is Niya Moto and I’m the only one-legged samurai kid in Japan. Usually I miss my foot and land on my backside. Or flat on my face in the dirt.
I have met many disabled children, through family and work. Their persistence and self-belief and sense of humour in the most discouraging situations never ceases to amaze me. I wanted to write a piece of history for them and to reinforce that we can all give anything a go. No matter what. Some writers believe you should never write a message in a story. But to me a good story has its own inherent message. With help from Niya, Yoshi, Taji, Mikko, Kyoko and Sensei, Samurai Kids became not only a sword-waving, martial arts action story but a celebration of difference. 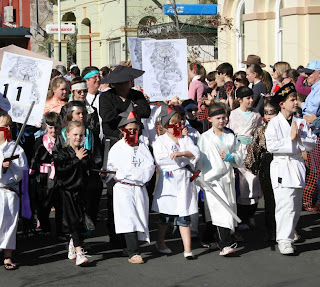 How much research was involved?
Heaps. I love research. I always spend a month ‘sleuthing around’ in a particular historical period before I begin to write – and then I keep researching until the story is complete. It’s the little things that I’m looking for - the story suggesters and the details to make my fiction authentic. Big historical events are just backdrop to me. I don’t write about them. But I still have to get all the facts right so I spend a lot of time reading texts, especially primary texts written at the time, watching documentaries and looking at images.
I also try to experience some of the things I am writing about. I went to sword fighting classes and took shakuhachi flute lessons. I was hopeless at both but it was useful research and provided wonderful stories to tell during school visits (and two practice bokkens to take with me – always of great interest to boys).

What were your favourite subjects at school?
I loved English and Ancient history and I can see how they have directly influenced me as a writer. But I also loved Maths and Computing which means I am very systematic with my research and love to make patterns with words. I don’t have a left or right side brain. I like to have a go at everything.

What did you like reading when you were growing up?
There were very few children’s books in the house I grew up in – just a few birthday gifts. My parents were not readers and didn’t value books. I was constantly looking for something to read. I read everything I could find – even Biggles! For my 12th birthday I asked for the Complete Works of Shakespeare. I didn’t understand a lot of it but I loved the music the words made when I read them aloud. I still remember the moment when as a new Year 7, I walked into the high school library. More books than I had ever seen in my whole life. Being a little bit ordered and mathematical I started at A. There I found Aldriss and Asimov and science fiction and fantasy quickly became my genres of choice. Favourite childhood books , now favourite adult books too, include The Chronicles of Narnia, Elidor, anything about the Arthurian Legend or Robin Hood, the Dune series and the Duncton Wood series.

What's been a highlight of your career so far?
I am fortunate to have had many ‘big’ moments even though I have only been published for five years. I call myself ‘the Cinderella author’ because magic just keeps happening. It was exciting to be shortlisted for CBCA Young Readers Book of the Year for Polar Boy, and to receive an IBBY award for White Crane but I think the greatest highlight was when I was the guest of honour at the Grenfell Festival of the Arts. It’s the longest running arts festival in Australia and past guests have included Patrick White, Thomas Keneally and Di Morrisey. I was a last-minute desperate choice when the high profile guest of honour cancelled at short notice due to health issues. My family live in the area so when my sister suggested me to a frantic committee member even though I had only written two books- they were just pleased to find someone willing to travel out west at very short notice.
The festival was wonderful and Grenfell made sure I didn’t feel like second choice. I think the community was quite proud that a quasi ‘one of their own’ was the guest of honour. The huge moment for me, was when I was watching the parade. Around the corner came a school dressed as my Samurai Kids. The parade stopped in front of me, the kids turned and bowed.’ Sensei’, they shouted. I just burst into tears.

What's next?
I have been experimenting with writing for other age groups. I have a picture book to be published by Walker Books Australia and I am currently finalising my first Young Adult novel. A seventh book in the Samurai Kids series, Red Fox, will be released in November 2012. The series is coming to an end and I am currently writing the last book, enjoying tying all the plot threads together.
I have a head full of ideas and scraps of writing to go with them – two new series, a historical novel and a historical fantasy. All for middle grade. While I have enjoyed my ventures into other readerships, I think in my heart I am still twelve years old – and that’s where I write.

Sandy Fussell is an author new to me. I'm rather taken by the stories on offer.

Hi Marybelle. Thanks for your comment. I love how Sandy has used her passion for history to research and write so many interesting stories.