Game show music playing
Come on down! Today we are playing a quiz called Guess The Children's Author.


It's simple to play. I'm going to give you clues (hopefully not too obvious) to guess who the author is. The answers will be at the bottom of the page. My son and I were playing a similar game recently showing off our knowledge of movie stars. So let us begin. 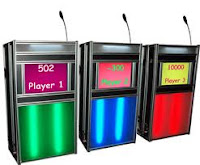 1. *I was born in Kent, in the United Kingdom.
*My family moved to South Australia to set up a farm in 1879.
*When I was eight years old my father bought me a pony, Brownie.
*I fell in love with the bush and spent my childhood painting with watercolours and writing stories.
*I studied Art back in the UK and published my first book 'About Us.'
*  I am best known for my stories about gumnut babies or bush babies.


2.  *I was born in Hampstead, London.
*I studied Drama and French at the University of Bristol.
*I have written a number of plays for school drama groups, songs for children's t.v and a phonics   reading scheme called 'Songbirds.'
*I am well known for writing in verse and in 1993, my song, 'A Squash and a Squeeze' was made into my first children's book.
*My picture books have sold more than 4 million copies in 31 editions worldwide,
My most loved and recognised picture book series 'The Gruffalo' have also been made into a stage production and short animated film.


3.  *I was born in Schelffield, Yorkshire.
*My parents owned a pub in Wyke, Yorkshire.
*I studied Graphic Design at Leeds College of Art and graduated in 1976.
*I am fascinated with gorillas and use them often in my picture books. My most recognised picture books include 'Willy the Chimp' and 'Little Beauty'.

4.  *I was born in 1949.
*I write mainly children's comedy books and I have written over 70 picture books.
*I attended The Canterbury College of Art and I've also worked at the BBC creating children's programs. You may know my picture books 'Princess Smartypants' and 'Prince Cinders'.
*My best selling book is 'Doctor Dog'.

5.  *I was born in 1977 in Portland, Australia.
*My art work is illustrated in New York, Dublin, London, Sydney, Washington D.C and Belfast.
*I am well known for writing and illustrating picture books for children, published by Harper Collins UK and Penguin USA. My picture books have a boy and his penguin friend as the main characters. My book titles include, 'How to Catch a Star',  'Incredible Book Eating Boy', and 'The Way Back Home'.
*My picture book 'Lost and Found' has been made into animation by London based Studio AKA.

6.  *Husband and wife team, started writing picture books when their children were young.
*Our first picture book 'The Big Honey Pot' was published in 1962 as an imprint of Dr. Seuss's Beginner Book imprint.
*Our picture book series have been made into child-friendly television shows and have been especially popular in America since 1974.

7. *I was born in Melbourne, Australia in 1946 but grew up in Southern Rhodesia, South Africa.
*I started my career studying drama and decided to retrain in literacy studies.
*I worked as an Associate Professor of Literacy Studies, in the School of Education, Flinders University, South Australia.
*My first picture book 'Possum Magic' was rejected nine times before being accepted by Omnibus Books. It has since sold over 3 million copies worldwide.

8.  *I was born in Boston, Massachusetts in 1919.
*I am a popular American Children's Author and Illustrator.
*I dropped out of business college and studied at the School of the Museum of Fine Arts, Boston.
*My characters were almost always anthropomorphic animals.
*I worked for the art department of various magazines before making a career breakthrough in 1949
with Little Golden Books.
*Over 100 million copies of my books have been sold and translated into 30 languages.


9. *I was born in East Dulwich, United Kingdom in 1897.
*My first book 'Child Whispers' was a collection of poems, was published in 1922.
*My books including the series 'The Famous Five' have sold over 600 million copies and have been translated into nearly 90 languages.
*In the 2008 Costa Book Awards I was voted the best-loved author, ahead of Roald Dahl, JK Rowling and Shakespeare.

10. * I was born in 1926 in Newbury, Berkshire.
*I began writing in 1945 and sold my first short story to the magazine London Opinion.
*My books have been translated into 30 languages across seventy titles and have sold more then 30 million copies worldwide.
*I named my most popular children's book character (a bear) after a train station.

You must have had fun researching this Renee. I confess I wasn't an A grade student on this quizz but enjoyed learning a bit more about fave authors and illustrators. Thanks.

You're welcome Dimity. I tried not to give too much away. I'm fascinated with the history of writers and how their writing life began :)

I TOTALLY love games and this is such a fun one - but too hard for me! The only one I knew without cheating was Stan and Jan Berenstain!

Hey Susanna,
Thanks for your comment and following again.
I might have to redo this game with better clues, and more title clues. Most people will know the author just from the title so I'll have to think of something. I know, I can describe the book characters.
Great to have you back. I love your blog by the way. I often pop over to your Pitching Game.

What a fun way to explore children's books and offer something educational for us big kids, too!!

Thanks for stopping by Share a Story-Shape a Future to introduce yourself. I'm so glad you did.

Wonderful to see you Terry. Thanks for your comment and visiting my blog.

Share a Story-Shape a Future is a fantastic blog to inspire writing and sharing books with children.