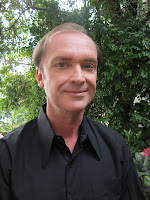 Thank you so much for having me here.

When did you first know that you wanted to be an author?
I was always into writing, from early primary school. It was something I enjoyed doing and felt good doing. It was me, I guess. But I didn't originally intend to be a writer. I wanted to be a magician, a ventriloquist, a puppeteer when I was in primary school. Then when I was in high school I wanted to be an actor and I went to Uni and after that I worked for five years as an actor--a long time ago. I was a very bad actor (once during a performance of Macbeth in Brisbane I fell off the stage into a tuba and got stuck for several hours!). I stopped being an actor, got a "normal" job and went to Egypt for a holiday. I got sunstroke in the Valley of the Kings, got better, came back to Australia and wrote the first Cairo Jim story. And from there I knew that I was meant to keep writing stories.
What's your background?
Acting and travelling have formed my background…I've visited many wonderful countries to research the Cairo Jim chronicles and to smell the sweet dust of History :-)
What was your road to publication like?
Honestly, after getting sunstroke in the Valley of the Kings, it wasn't difficult. I wrote the first novel in five months, sent it to a publisher (I didn't have an agent in those days), and it was accepted two weeks later. It was so quick, I almost fell over. I was, I think, in the right place at the right time, writing the right story at the right time. It was meant to happen; I've always felt that.

Congratulations on your new mystery series,
Phillis Wong. What inspired her character?

Thank you; I love writing the Phyllis Wong stories. She is inspired by my love of magic…a few years ago I wrote a performance piece which I occasionally do for schools and other places, called The Startling Tale of Hamlet, Prince of Denmark. It's a verse retelling of Hamlet (with additional dialogue by William Shakespeare) and is presented with magic tricks along the way. As I researched the magic for this, and as I bought the props and tricks I wanted to perform with, I began getting back into the world of conjuring. And then, a few years ago, I had a marvellous chance meeting with Australia's leading lady of magic, Sue-Anne Webster. I started publishing her tricks in a children's magazine I write for, and she presented more of this wonderful world to me. As I came to know her more, the character of Phyllis Wong, the girl magician with a brilliant mind and a clever way of seeing things, began to emerge.

Tell us about your popular book series, Cairo Jim.
I've travelled the world, researching the 19 books that make up the Cairo Jim chronicles. They were great fun to do and are still very popular in all sorts of countries …

What did you like reading when you were growing up?

I liked funny books (and I like writing funny books now), and some science fiction. I read books like Ray Bradbury's The Illustrated Man and I enjoyed mystery stories, like the Three Investigators series presented by Alfred Hitchcock. And I remember very well The Adventures of Huckleberry Finn and some of Ivan Southall's stories. They've stayed with me.
Tell us about your public appearances. Can you give us a sneak peak?
Well, to promote Phyllis Wong and the forgotten secrets of Mr Okyto which comes out on August 1, we'll be presenting some special magic shows to tell everyone about the story. During August and September we'll be visiting bookshops and schools. I'll be reading from the story and Sue-Anne Webster will be performing magic, similar to the magic Phyllis herself performs in the book. It'll be fun, and there's a sneak peek on Youtube:

http://www.youtube.com/watch?v=m5HuIj53jEU
…and details of the appearances can be found at  http://www.phylliswong.com/appearances
What advice would give aspiring children's authors?
Keep your imaginations open; feed them daily; read lots of things--short stories, novels, graphic novels. Go for long walks and look at everything you see. Keep a notebook and pen with you always, and always jot an idea down, even if it seems silly. You never know when it will blossom and grow into something amazing for your writing. Try and write a little bit every day, in a private place, away from any distractions. Above all, believe in yourself and your own story.
What's next?
I am writing the second Phyllis Wong story now, and it's shaping up to be a huge tale. It's taking the young magician on a journey that she could never have foreseen; a journey where the magic she knows will be nothing compared to what she'll encounter. I'm having the best time creating the world of Phyllis Wong … she's such a great character and full of surprises!

Thanks Renee,
for introducing me to a Kid's author I wasn't familiar with. Loved your interview and learning about Geoffrey and all his experience and advice ... Karen :)