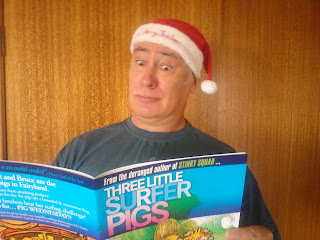 Only 4 sleeps till Christmas and a huge welcome to popular children's author, DC Green.

Tell us about your favourite Christmas memory?
When I was a boy, my whole family spent every Christmas holidays camping in a huge canvas tent at Scotts Head on the NSW North Coast. While the adults would gurgle away their afternoons at the local bowling club, us kids were free to roam ‘Lord of the Flies’ style – surfing, climbing trees and cliffs, exploring the bush, catching fish, cicadas and ghost crabs and generally having the sort of wild, unsupervised fun that would land parents in all sorts of trouble today!

Which book would you recommend people read this Christmas?
I wouldn’t be much of an author without gratuitously self-promoting my latest (and final!) book in the ZAPP series, Erasmus James and the Grat Siege. This funny and moving story features mutant chooks, ninja horses, a cast of thousands and a desperate siege conducted by an army of giant, armour-covered rats! Oh, and all with the fate of the universe at stake!!

How are you celebrating this year?

Hopefully I’ll be able to sneak out for an uncrowded, super-early surf before everyone else wakes up! Then will follow the annual present-opening frenzy (which is especially enjoyed by my tinsel and box-loving guard cats) and the traditional massive lunch of over-eating with family and friends.

What’s the best and worst present you’ve ever received?
The two were combined! When I was eight, I received an amazing inflatable kite. It took half an hour to blow up and was only in the air for 30 seconds before another boy tested HIS new Christmas present: an air rifle! BANG! My present was an exploded, shredded plastic skin, and I was back to catching cicadas.