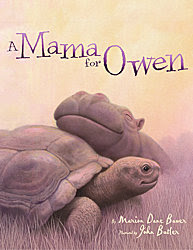 My Favourite Picture Book
It wasn't easy for me to choose a favourite picture book but in honour of Megan Bickel's Favourite Picture Book Blogfest, this one definitely came to mind.
This heartwarming picture book, A Mama for Owen, written by Marion Dane Bauer, and illustrated by John Butler, is one of my favourites. It was published by Simon and Schuster Books for Young Readers, in 2007.
It is based on a true story of a young African hippopotamus named Owen, separated by his mother in the Indian Ocean Tsunami, in 2004.
Owen befriends a giant tortoise named Mzee, which means 'old man' in Swahili. Soon this unlikely pair, swim together, sleep together, and eat together.
What I love most about this story, is that Mzee doesn't seem to mind that Owen has chosen him, a 130 year old male tortoise, to be his mother.
The illustrations by John Butler, change from a soft grey/blue during the devastating tsunami, to a beautiful golden yellow depicting hope and survival.
There's no denying that this amazing story pulls on the heart strings and like many true stories, it demands to be told! It sits proudly on my bookshelf and reminds me to be grateful for the wonderful surprises in life and that good situations can still come out of bad.
Posted by Unknown at Saturday, March 05, 2011

I love this one too! The illustrations are divine and the story is just beautiful. Thanks for sharing :)

Hey Karen,
It's an incredible story hey! I also love the picture book, 'Christian the Lion.' It's another fascinating animal story but this time with humans.

Karen, this does look like a most beautiful book and the illustration on the book cover is darling. I'll be looking for it.

And to "Book for Little Hands" above, the story of Christian the Lion truly is amazing. I sent a documentary video about him to my sister just a few weeks ago. So touching.

I've heard of this true story, but not seen the picture book! Wonderful! Thanks for participating in the blogfest!!!

I will have to go find this right now. I love John Butler's illustrations and I've always enjoyed Marian Dane Bauer's fiction. How did I miss this?! Thank you for sharing- it looks and sounds like a precious read.

Oh, I keep seeing this book around, but still haven't had the chance to read it. I almost bought it a couple of times. I did finally buy Christian the Lion. I love inspirational books. It sure is hard to pick a favorite, isn't it?

Wow- your description almost made me tear up. I will definitely check this out for my kids. thanks for sharing!

Sounds like a lovely book! I'm making a list of all the recommended books that I've not heard of before for future little readers (if my kids have children that is-lol)that I am finding about today from the blogfest and this will definitely be on there! Thanks for sharing!!!

Looks like a good book. There are so many out there that I have never heard of but would like to read some day.

Thanks Megan, Christine, Library voice, Katharine, Danette, and Dawn. It's been a wonderful experience blogging about our favourite picture books.
Thanks Megan for holding the blogfest. I've made my list and I'm going out to buy and borrow many of the picture books that I've read about.

Sounds wonderful. Will have to look this one up at the library.

Oh, what a beautiful book cover!

I too have seen this around but have never picked it up. Must rectify that. Glad to find your blog!

I didn't know this story (the true event or the PB), but I'll definitely have to get this book. My boys will love it!

Thanks D.J.Kirby, Taio, Julie and Alison for visiting my blog. It's a very special book-well written and beautifully illustrated.

What a lovely post, I have read about this book before but never found a copy. I shall renew my search now though! Thank you :)

Lovely to see such positive comments about John Butler's illustrations in this book. It was a little while ago, but I thought I'd just let you know that his adorable illustrations are now available for the first time as prints for little ones. As his daughters, my sister and I have recently set up a family run company - www.littlebluezebra.com - specialising in baby animal pictures, all featuring the artwork of John Butler. We send them worldwide so they are available for children all around the world to enjoy.